Hello to All!
The 10th Anniversary North American Rally in Goshen is now in the history books. If you were there I hope you had a great time and are planning to attend the next Rally in Goshen when it rolls around in 2017. For all of you first-timers: thank you so much for coming. Now that you know what it’s all about, it will be so much easier next time.

There has been much going on in the Heartland Owners Club in the last couple of months. For the first time, every Region of the Heartland Owners Club has a Region Director. We are very fortunate to have the depth of experience and enthusiasm that our Region Directors bring to the Club. Garry Gilbert, Arizona Chapter Leader, has assumed the role of Mountain Region Director. This is awesome as the Mountain Region has not had a Director before. Garry will be continuing as Arizona Chapter Leader through his January 2017 Chapter Rally in Havasu.

Mark and Linda Comer who have been the Ohio Chapter Leaders since June 2008 decided to let someone else in on the fun and retired in April 2015 so Bob and Connie Sims could enjoy the Chapter Leader role. That’s a long run guys.

I was curious to see who else who stepped up in 2008 and are still in the Chapter Leader role. There are only 3 remaining: Ken and Kathy Strong—Illinois, Bob and Patty Hartsell—California-South, Kristy and Mark Carlson—Oregon.

So what happened to the rest of our founding Chapter Leaders? Some moved on to the Region Director role: Wayne and Gayle Wilson—retired Ontario CLs and retired Canadian RDs, Jay and Stella Coffman— retired Texas CLs and current South Central RDs. There are also those who remain active in the club, but are low key: Tom & Geraldine Weber—retired Wisconsin CLs, Gus and Deb Funderburg—retired Virginia CLs. There are also two special people who have been Chapter Leaders off and on since 2007, stepping up whenever we needed them: Phil and Becky Smith—current South Carolina Chapter Leaders.

And the rest of the founding Chapter Leaders: Rand and Beverly Lutman British Columbia, Richard Jagiello and Blanca Forth—Michigan, Mike and Betty Tovar—Arkansas, Teresa and Art Mitchell—California-Central, Deb and Ray Duryee – California-North, Forrest Fetherolf and Karen Wright—Nevada, Larry and Sam Bandstra—South Carolina. Do you know these folks? Say “Thanks” when you see them because they helped the HOC through its birth and early childhood.

Thank you so much to all the HOC Chapter Leaders and Region Directors, past and present, for giving of their time and enthusiasm to support the club and Heartland RVs. Thank you for your patience and understanding as we strive to make this the best Club it can be for all its members.

If you feel you would like to take a shot at Chapter Leadership we would love to talk to you about it. The only requirements are enthusiasm, access to a computer, some basic computer skills and the ability to talk with people. We ask that if you volunteer that you commit to a minimum of one calendar year, essentially hosting one Chapter Rally. There are Chapters yet to be formed and Chapters with no Chapter Leader. If your Chapter already has a Chapter Leader tell them or your Region Director you would be interested someday when they retire. If you’d like to try it out, offer to Wagonmaster the next Chapter Rally. Try it, you’ll like it.

Until next time: have a great summer! 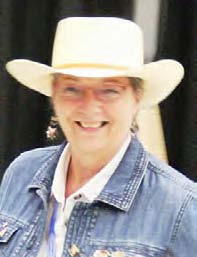